THE CASAL’S BEGINNINGS (by Montserrat Torruella) 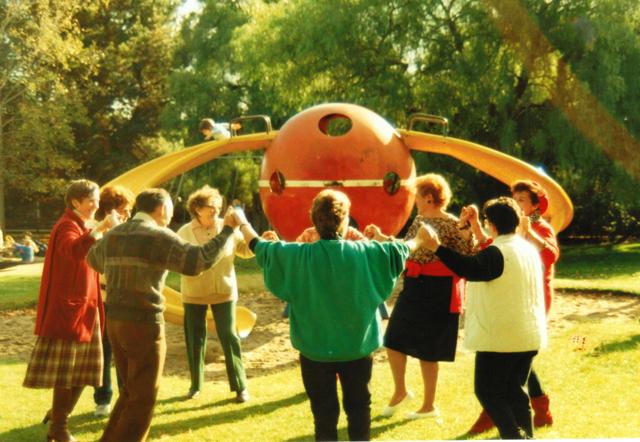 “Despite the forecast for that day was not good, I took my “senyera” and I arrived to the park thinking that maybe nobody will show up…What was my surprise when I saw the red colour of a “barretina” among other people. Mrs. Villà was there too, at that point she was 90 years old.  About 40 people attended the call, most of them did not know each other.  We danced some “sardanas” and afterwards we decided to start a Casal in Melbourne. I was nomitades for the position of Secretary and organised the first Saint John’s Eve in 1986.

1986
In mid April I received a telephone call from a person unknown to me at the time … a Montserrat Torruella de Barber inviting me to attend a barbecue to be held at Harleston Park (Elsternwick) that following Sunday April 27. She asked me if I spoke Catalan and I answered “a little” (I am Australian born of Catalan parentage). At this barbecue I met some 35 to 40 Catalans and before the day was over a decision was made to establish a Casal. We sealed the decision by dancing our first “Brotherhood Sardanas”. What an historical day for the Catalans of Victoria!

Becoming a member of the Casal has given me the opportunity to learn much more about the history and culture of my parents‘ homeland. This in turn gave me the information necessary to promote the Catalan culture to the Australian community whenever and wherever possible.

Having been elected to the provisional committee I suggested we join de Melbourne branch of the Migrant Resource Centre who assisted us greatly in preparing our constitution and our incorporation. It was through the Migrant Resource Centre that we successfully applied to our first grant. It was also by invitation of the Migrant Resource Centre that we hurried up and produced some Catalan costumes to unable us to take part in our first Australia Day procession taking the Catalan flag through the streets of Melbourne on January 26th, 1988. Another request of the M.R.C. was for our “Sardana” group to dance the “sardana” at the Myer Music Bowl and for the Casal to serve Catalan food. It was a performance for Senior Citizens Week.


1988
1988 was a very big year for all of us. It was Autralia’s Bi-centenary. Firstly the Tall Ships came to Australia in January and the Spanish Navy training ship. The Juan Sebastian de Eclat was the largest in the fleet. Many members of the Casal had the opportunity to attend the Sunday Mass on board. In fact the baby son of two of the Casal members, Albert Trujillo was christened during the Mass. On April 10th the inauguration of the Casal took place in the Lower Melbourne Town Hall. In June, King Juan Carlos and Queen Sofia visited Canberra. The members of the Casal were given the opportunity of attending the civic reception held for them in Canberra. It was also the year The Ethnic Public Broadcasting Association of Victoria was established. The Casal was heavily involved in the formation of the Catalan programme. We also took part in the Spanish Festival selling Catalan food.

1989
In January we again formed part of the Australian Day procession flying the Barcelona Olympic flag as well as the Catalan and Australian ones. In April, at the request of the ABC I forwarded them Sardana records to be included in their radio programme The Europeans.

1990
On July 6, the members of the Casal were again offered the opportunity of a visit to Canberra. This time the reception was for Prince Phillip of Asturias. In November we commenced negotiations to obtain an office/library for the Casal at Ross House in Flinders Lane, in the heart of the city.

1991
February 10th the official opening of our premises at Ross House took place. To introduce ourselves to the Melbourne public we had a large window display at Ross House for the month of July. We were very pleased to hear in November 1991 that Australian Research Council approved a grant to Dr. Robert Archer to assist his work on the Catalan poet Ausias March. Dr Archer was the first Vice-President of the Casal and senior lecturer in Spanish and Catalan at LaTrobe University. How rewarding to see Catalan culture being recognised in Australia at that level. On November 21st we had much pleasure in welcoming Josep Carreras on his first visit to Melbourne. December 21st at the Melbourne Concert Hall there was a presentation of Christmas Carols from Around the World amongst them a Catalan one. As president of the Casal Joan Simon-Codina was called to assist with the correct pronunciation of the Catalan carol. The very next day the Casal was asked to provide an exhibition of Catalan artefacts, costumes and posters for the Australian Olympic Veterans Club. As Joan Simon said at the time “It makes the existence of the Casal worthwhile if only for occasions such as these.

1992
February 9th, I promoted a picnic with “The Early Spanish Settlers” which reunites Catalan, Castilian and English speaking members, invited members and friends of the Casal. This first Pioneer Picnic which was attended by more than a hundred people.
The Casal was also approached by Fiona Vizard of TV Channel 7 for some translations in reference to their coverage of the Barcelona Olympic Games. May 1992 brought us the exciting news that LaTrobe University has signed an agreement of co-operation with the Barcelona University to teach Catalan Studies in Australian Studies in Barcelona. On June 26th the Casal again participated with LaTrobe University in the Quincentenary Conference of Christopher Columbus and the Consequences of 1942 in History. Literature and Art a poetry recital by the poet Octarvio Una who was visiting Australia for the Conference.

1993
February 21st at the Casal Mrs Beatriz Glattauer of LaTrobe University presented certificates to the students, members of the Casal, who had completed the Catalan course at LaTrobe. In May, we welcomed to Melbourne, Victoria de los Angeles, her pianist, Albert Guinovart and their manager. On September 11th, Professor Francisco Martinez of Edith Cowan University, Perth WA was also our guest. He introduced us to his new book Spanish Speaking People in the Antipodes. The Casal was presented at the exhibition of the pictures of The Malaspina Expedition which was held at The Melbourne University.

1994
We were accepted as members of the Ethnic Communities Council of Victoria, , which is the consultative body on ethnic affairs to the Victorian government. On February 8th, I had the honour of representing the Casal at an International Women’s Day Costume Parade and later on that year Rosa Querol and I represented the Casal at an Hispanic Cultural Evening. Rosa recited a poem in Catalan and I performed the English translation. The Casal also provided most of the posters for the evening.

On September 11th, at the “Diada” (Catalonia’s National Day) at the Casal, we had much pleasure in welcoming Mr. John Bryson, one of Australia’s foremost author to launch his latest book, “To the Death Amic” This book was the documentation of the early life of two Catalan brothers, both members of the Casal, at the beginning of the Spanish Civil war.

In October, the Casal’s president, Joan Simon-Codina and his wife Maria and I attended The International Conference of Casals which was held in Barcelona on October 27 to 29, 1994. Joan Simon delivered a paper on Catalan culture and on the closing day of the Conference, we were fortunate enough to give Jordi Pujol, the President of the Generalitat, a kangaroo lapel and a little piece of Australian-Catalan history…. a framed photograph of a Parer Document that was given to Mr Estevan Parer on the 8th February 1908 by the Spanish community of Melbourne in recognition of his 50 years as a Melbourne citizen for the generous service he gave the community over those years. Estevan Parer arrived in Australia in 1858 from Alella a town of Barcelona.

On November 27th, 1994 the Casal once again was able to co-operate with LaTrobe University launching Antipodes V which is a journal of Hispanic Studies. This particular edition was on Catalan Literature with much input by Dr. Robert Archer. In attendance was Dr. Michael Osborne, vice-chancellor of LaTrobe University, Roy Boland head of the European Language Department of LaTrobe, the Spanish Consul Sr. Arturo Reig Tapia and representing the government of Victoria, Dr. Roland J.H.Wells.


1995
April 10th a return visit of Victoria de los Angeles. On June11th we moved from the second to the third floor at Ross House allowing us more space for the library and being on the same level as our function room. August 1995 we received news from the Generalitat that our president Joan Simon-Codina had been awarded the J.M. Batista Roca award and in September he and his wife, Maria went to Barcelona to receive it.

On August 24th Ross House held its Open Day and the Casal had a large display of posters and artefacts. We also supplied “Faves a la Catalana” and “Pa i tomaquet i pernil”. Hundreds of people came through the building that day which was excellent publicity for the Casal. On Sunday September 3rd, the president received news form TV3 Catalunya to do an interview with them the following day. The TV crew took shots of Melbourne and then outside and inside shots of RossHouse and the Casal followed by the interview with Joan Simon and Izaskun Arretxe. The programme was shown in Barcelona on Sunday night, the eve of the “Diada”. During November we were visited by some young Catalans on tour through Australia. On November 15th the Casal was represented at the National Conference of the Federation of Ethnic Community Councils of Australia.


1996
April, May and June we had a display in the windows of Ross House informing Melburnians about the Day of the Book and the Rose, what a Casal is, where we are situated and informing the Victorian public about Catalonia and its capital city.
In the above lines I have related many of our contacts with the promotion of the Catalan culture to the Australian community but we at the Casal have also enjoyed many social events of all kinds, especially our festivity days, “The Diada” (Catalonia’s National Day) the Day of the book and the rose (International Book Day) St John’s day, All Saints Day etc. And we continue to do so. Very few if any of the above events would have taken place if the Casal did not exist.
I am very grateful for the phone call I received on Thursday April 24th, 1986 from Montserrat Torruella Moragas as it has resulted in many happy hours both for my mother and me… particularly for Mum. The seed that was sown ten years ago and thanks to our hard working Committee and our enthusiastic members keep growing. !!!!Great oaks from little acorns grow!!!!